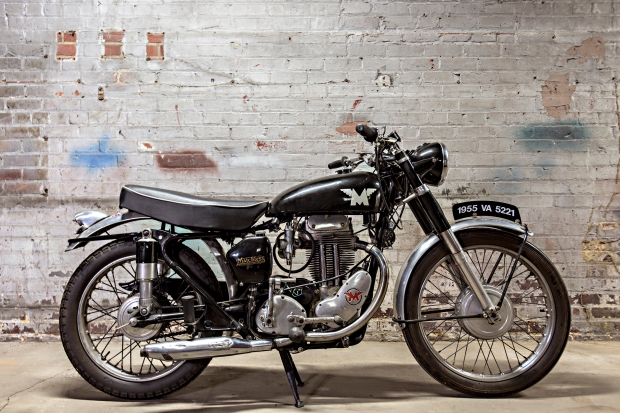 One of the other motorbikes in my collection is a 1955 Matchless G80CS.  In its origin, it was designed for early moto cross racing.  In fact, Bud Edkins (the man who did the jump in “The Great Escape”) was a Matchless factory rider in the early 50’s.  The G80 was a 500cc single cylinder motor.  1955 was the last year for the long stroke motor from AJS and Matchless.  The “S” stands for sprung supsension.  At the time you could get this motor in a variety of frame configurations.  The “C” stands for competition motor.  This gave a huge boost to compression ratio and power.

I came across my bike from a friend who had it in his collection.  It was not running as the oil fitting in the crankcase had broken and the oil line could not be properly secured.

Just to get it running, as everything else appeared to be squared away enough, I turned out a fitting in my Lathe and JB welded it in.  Turns out it was the most oil tight part of the bike.  After a bit more TLC and new tires, I was able to put about 100 miles on the bike.  Now it should be noted that operation of this motorcycle is fairly complicated as it is quite different from modern bikes: right side shift, GP shifting, manual choke, decompression lever, manual ignition advance and retard.  It takes 100% concentration to ride, but it is such a joy to ride and makes the most wonderful noise.

Well it didn’t last too long.  I was riding home from the usual Poe’s Pub motorcycle meeting in Richmond and the bike started losing power before finally dying.  The picture above is where the bike finally decided to let go.  Luckily, the family who owned the place were quite nice while I waited for my dad to pick me up with my truck.

After some investigation the problem was found.  The exhaust cam gear broke a tooth and then shredded the timing pinion on the end of the crankshaft.  At this point I decided the whole bike needed a mechanical overhaul, with some minor cosmetic touches.  I have at this point disassembled the entire bike and am slowly collecting parts to put it all back together.

Luckily I have met lots of motorcycle enthusiasts recently and keep getting introduced to more.  These gentlemen seem to have a lot more knowledge than I do about the old bikes.  They shall, for now, remain nameless as I haven’t asked their permission to mention them by name, but a few guys are helping me sort through the motor at the moment.  With help, I have rebuilt the crankshaft and next up was to deal with the rest of the motor.  First things first was to get it vapor honed so it is nice and clean for welding.

I enlisted the services of Sean Skinner at Motorelic to do the vapor honing.  He is building some seriously cool bikes.  The likes of which can be seen on some popular motorcycle websites: Pipeburn and Bike Exif.  He did an excellent job and was very fair in price.  We also talked about some other projects and what to do about my crankcase issues.  If your in the Virginia area and need to do some vapor blasting on your bike parts, give him a call.

The next few photos show the severity of the crankcase issues I am having to deal with.  We have game planned for some of the small cracks, but not all of it.  The vapor honing really did a great job of getting things clean with out being too aggressive.  It also exposed a few more issues that are going to have to be dealt with.  This is going to turn into a much longer project than anticipated, but vintage race bikes must be saved. 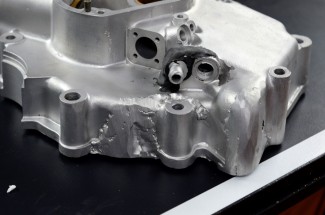 I will start getting together a parts list of bushings, bearings, etc so that once the case gets welded up it can go back together.  No sense in ordering though until the welding is done.  It looks like it is going to be quite tricky.